Today, we are striking against censorship, join us!

Home » Blog » SOPA / PIPA » Today, we are striking against censorship, join us! 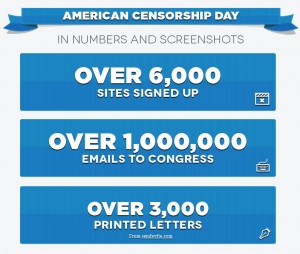 Millions of Americans oppose SOPA and PIPA because these bills would censor the Internet and slow economic growth in the U.S.

Two bills before Congress, known as the Protect IP Act (PIPA) in the Senate and the Stop Online Piracy Act (SOPA) in the House, would censor the Web and impose harmful regulations on American business. Millions of Internet users and entrepreneurs already oppose SOPA and PIPA.

The page http://sopastrike.com/ is on strike today to fight SOPA and PIPA.

Today, we are striking against censorship

Join The Strike! and add this to your site

The three most definitive articles on SOPA and PIPA: Free Speech, Problems, Security

Fight for the Future is a non-profit organization fighting for people’s freedoms in a new digital age.